Vancouver is the most expensive place to buy a home in all of Canada and MoneySense and Zoocasa have compiled a list of the best and worst neighborhoods for real estate.

Various factors helped rank the respective neighborhoods, including benchmark price, one-, two-, and three-year growth, as well as value, economics, and accessibility.

Sixteen different neighborhoods were ranked by MoneySense, but the top three are no doubt some of the most beautiful neighborhoods in all of Vancouver.

Located in the west side of the city, Fairview encompasses areas like False Creek, Granville Island, and the South Granville shopping district which is also home to lots of amazing local restaurants.

It’s also home to Vancouver General Hospital and is very transit- and bicycle-friendly.

“The neighborhood has seen steady price growth over the last few years,” MoneySense notes in its report.

MoneySense says Fairview has a value score of 4.2 out of five. 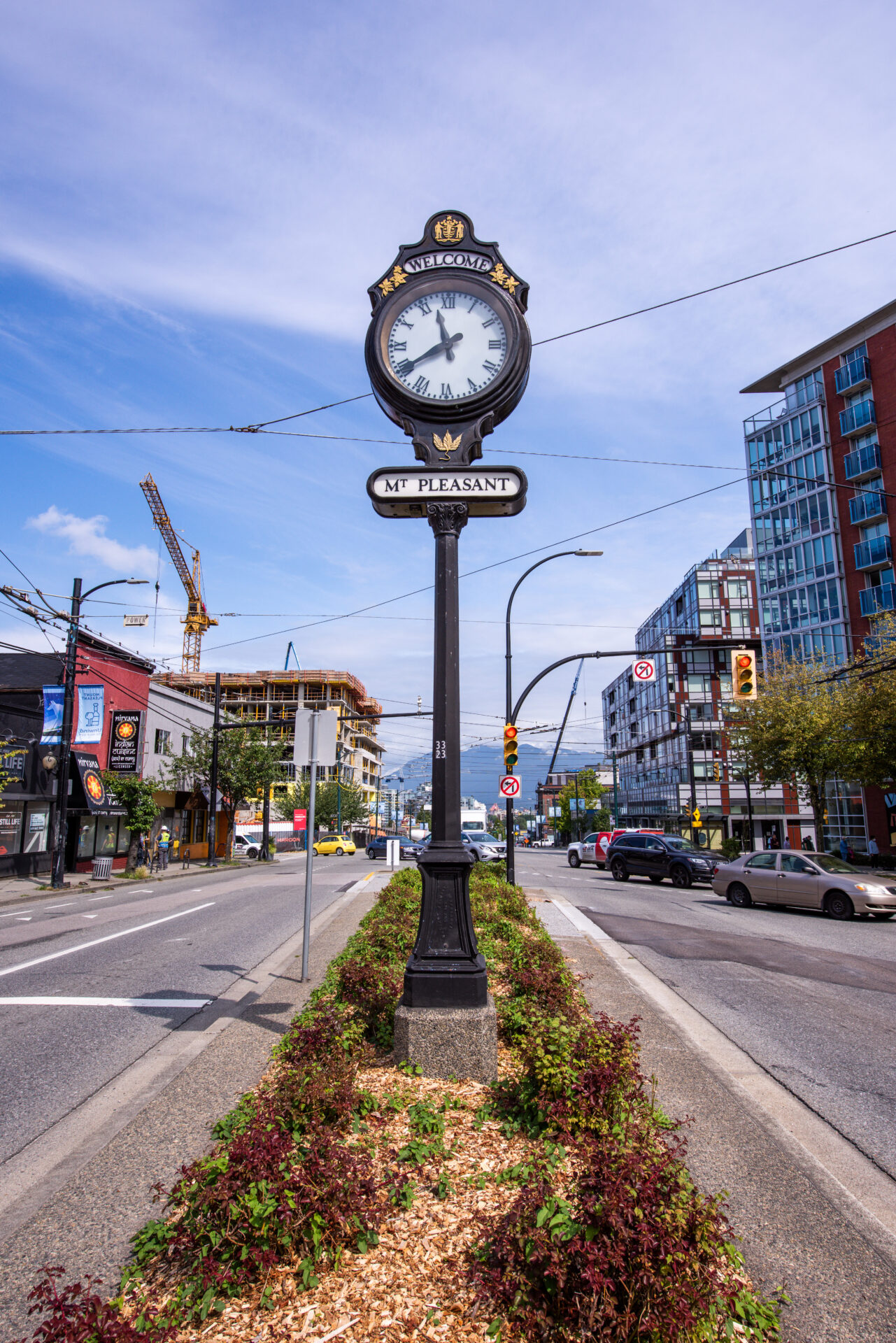 While Mount Pleasant is currently in somewhat rough shape thanks to the ongoing construction of the Broadway Subway, the neighborhood still has a lot to offer.

MoneySense says that Mount Pleasant is known for its older heritage buildings, restaurants, and “eclectic stores.” It’s also a neighborhood that’s a favorite among home buyers.

It has a value score of 4.8 out of five thanks to this continued growth.

Mount Pleasant has great walkability, is very transit- and bicycle-friendly, and has a ton of great breweries and coffee shops.

Priced well above both Fairview and Mount Pleasant, Dunbar-Southlands is considered one of the most expensive places to buy real estate in Vancouver.

It isn’t unusual to drive by enormous mansions in the area. The benchmark price in December of last year hit $3,093,460, but MoneySense notes that the price isn’t increasing as fast as in other neighborhoods. It has a value score of 0.8 out of 10, but it has a neighborhood economics score of five out of five. 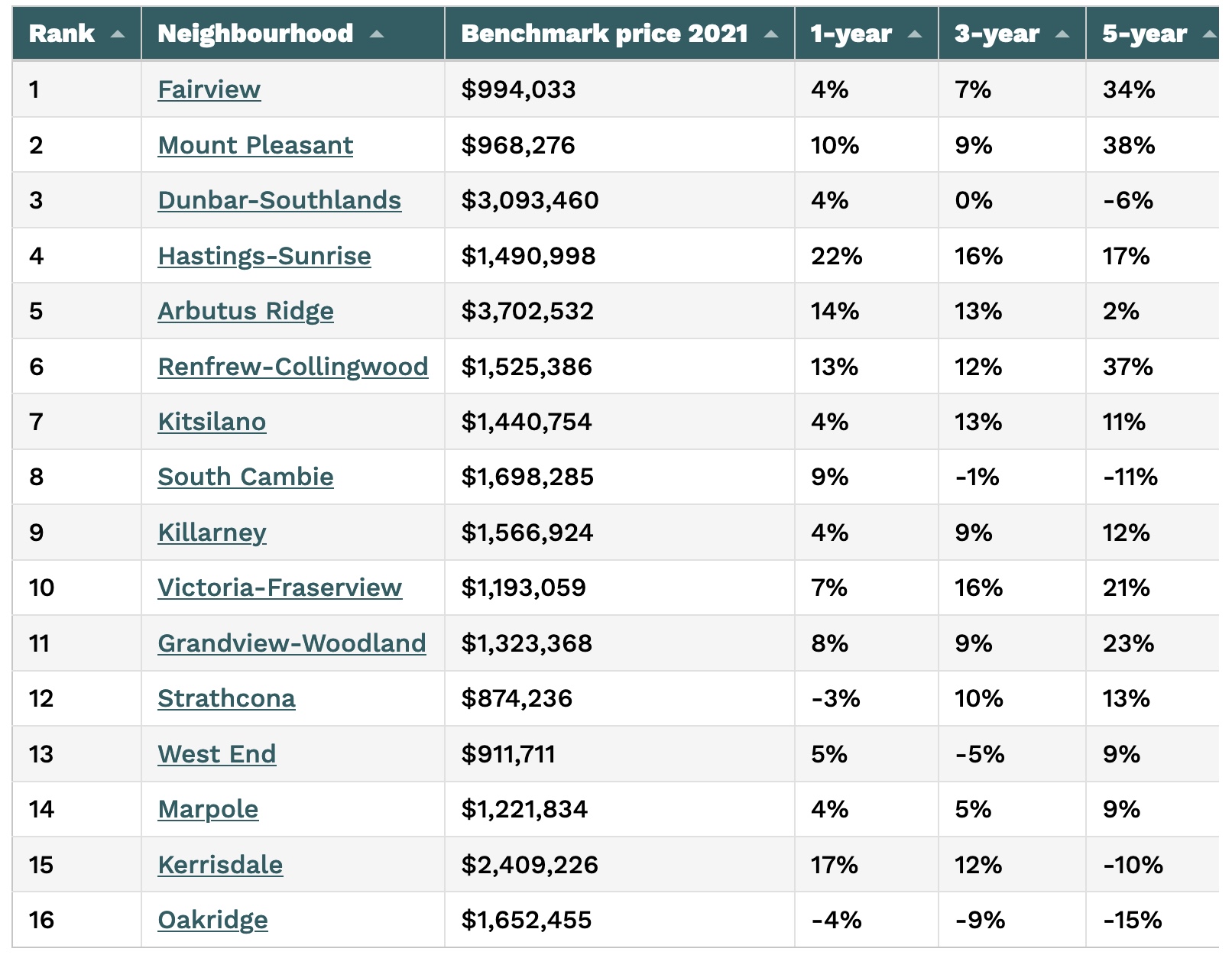 Looking at the full list, most neighborhoods are seeing some growth over a five-year period with the exception of Oakridge. The core of Oakridge is currently undergoing a major redevelopment with the reconstruction of Oakridge Mall. Still, it’s surprising to see such a drop.

While Hastings-Sunrise didn’t quite reach the top three, the growth the neighborhood has seen over the last year is significant (22%).

While BC has instituted many policies to try and keep prices in check including the empty homes tax and the foreign buyers’ tax, prices continue to skyrocket.

MoneySense says prices stalled during the pandemic, but the market is seeing a major recovery now.

“With the record-low number of houses on the market, there has been a lot of upward price pressure in the last two years,” said BC Realtor Casey Archibald in a statement.

You can expect prices to continue to soar until supply returns to “normal levels.”

MoneySense doesn’t note who these areas are best and worst for when it comes to demographics, but for a lot of people, any of these Vancouver neighborhoods are completely out of reach, particularly for first-time home buyers.

Unless they’re willing to put in the time to save for a down payment.

Why Wendy’s founder named his burger empire after his daughter