Need him to take a few turns in your rotation? Done and done, with an unlucky 4.29 ERA and more representative 2.95 FIP over five starts in late April and early May.

Need him to mop-up eight outs in relief? He did that twice in mid-May — down three against the Seattle Mariners and up eight against the St. Louis Cardinals.

Need him to rescue your closer from a two-out, bases-loaded, bottom-of-the-ninth jam with a one-run lead? It took Stripling just three pitches to earn that out against the Los Angeles Angels a week-and-a-half ago.

But it’s also his curse. As Hyun Jin Ryu has bounced between active duty and the injured list while trying to pitch through forearm and elbow discomfort this season, Stripling has bounced between Toronto’s rotation and the bullpen right along with him despite producing better results and, meritocratically, being more serving of a rotational role. That’s because Ryu, like many pitchers, would struggle oscillating between roles like that. But to Stripling, perhaps MLB’s best sixth starter, it’s just another day in a swingman’s career.

“When I was young and first in the league, I did it to survive. I knew that was how I was going to stay in the big-leagues and accepted the role that way,” Stripling says. “And now that I’m older, I view it as such a valuable asset to a team. A guy that can start; or bridge a short start into the back end of the bullpen; or save innings for the bullpen. I just think it’s really valuable.”

So, it was just another day Monday in Kansas City, where Stripling was making his first start in a month, having overhauled his between-outings routine for the thousandth time, only to have it further disrupted by a “rain delay” — the Royals pre-emptively covered their infield in anticipation of a storm that never arrived — that pushed the start of the game back a couple hours. By the time he finally took the mound, it was nearly 9:30pm CT.

Stripling’s response to having any semblance of pre-start normalcy deep-sixed was to retire the first three hitters he faced on five pitches. And the next three on 15, eight of them in a battle with Salvador Perez that ended with Stripling getting the four-time silver slugger to swing through a change-of-speed slider on the plate he wasn’t expecting.

And then, in the third inning, it finally started raining. For real this time. Fans streamed for the contests. Stripling kicked mud off his cleats behind the mound between batters. Michael A. Taylor reached on a perfectly placed groundball that found a hole in Toronto’s shift. But, as he does, Striping navigated around it, keeping the speedy Taylor close at first while getting two quick outs to wrap a 10-pitch inning. And he cruised through the fourth on only 14.

Sunday, Kevin Gausman was pulled in the fourth inning at 87 pitches. A day later, Stripling was starting his fifth at 44. And he finished it after three more efficient outs having thrown 56. Entering the night, the Blue Jays would’ve been delighted to get 12 outs from their not-stretched-out swingman. Stripling went and gave them 15, averaging 3.73 pitches per out.

And the Blue Jays won, 8-0. Offense came by way of big swings from Bo Bichette, Vladimir Guerrero Jr., and Santiago Espinal, who all went deep. The Blue Jays probably still win this game even if Stripling merely pitched to sixth-starter expectations. But he blew those out of the water, allowing that Taylor single and nothing more over his five frames.

“You have no idea how happy I am that Strip went the five innings that he did,” said Blue Jays manager Charlie Montoyo. “He was lights out and it was great to see. We needed that. We were thinking about four innings, 60 pitches. And he went five with 56, which was awesome. Great job by him. He set everything up for this game.”

And he did it in typical fashion. Tunneling, changing eye levels, speeding bats up, slowing them down. Mixing and matching, working all over the zone, moving off barrels. Sequencing creatively as he used all five of his pitches to both sides of the platoon and generated at least one out with each of them.

Stripling’s kitchen-sink approach makes him an uncomfortable plate appearance even for the game’s most prepared hitters. So far this season, he’s thrown his four-seamer only 35 per cent of the time, usage that sticks out as light even in 2022 when pitchers league-wide are throwing fastballs at a record-low 55 per cent rate.

He’ll vary his looks with sliders to right-handed hitters, changeups to lefties, and curveballs to both. Plus, a new 90-mph sinker he designed over the off-season and began throwing in games this spring. Oh, and we lied — he’s throwing his changeup more often to right-handers this season, too. He’s actually throwing it much more often in general, using it as his go-to secondary offering, if he even has such a thing.

Just not on the first pitch of a plate appearance to right-handers. Those guys have a nearly even chance of seeing a four-seamer, slider, or curveball. Similar story when Stripling gets to two strikes, only it’s an even mix of four-seamers, sliders, and changeups. Left-handers definitely have to think about the changeup when Stripling’s ahead. But that hasn’t stopped him from throwing it more than half the time in 1-1 and 2-2 counts. Or from using his four-seamer more than a quarter of the time in two-strike counts. And most of the time in 3-2 counts. He’s liable to flip up a slider in those spots, too. Or the new sinker as a surprise pitch.

See, it’s a lot. Unpredictability is the key. Constantly varying sequencing and patterns to stay a step ahead of hitters who have more data and video at their disposal than ever before. You’ve got to do that stuff when your heater sits 92. And you’ve got to locate. Stripling throws each of his curveball, sinker, four-seamer, and slider in the zone more than half the time — in that order. If you’re an opponent preparing a scouting report against Stripling, it’s tough to know where to begin.

“His ability to command the baseball, show hitters different looks, and even just put stuff on paper for other teams to think about, is really important,” says Blue Jays bullpen coach Matt Buschmann. “Hitters have to be aware of all of his pitches. Because he can throw all of them where he wants to. Hitters can’t really sit on anything. They can’t eliminate pitches from his repertoire.” 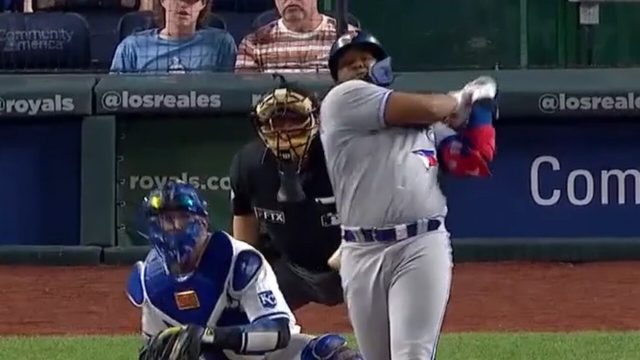 The only pitch Stripling’s not throwing consistently for strikes is his changeup — but why would he? He’s earned a 34-per-cent whiff rate with it this season, and 14 per cent when he throws it outside the zone. That’s the 13th best out-of-zone whiff rate among the 188 MLB pitchers to throw at least 50 changeups this year. And when hitters do put it in play, it’s typically for an out, as they’re batting .182 with a .295 slugging percentage against the pitch.

That increased changeup usage is a particularly interesting development for Stripling, who’s always thrown it plenty, but never this much. In the past, Stripling’s typically tried to tunnel curveballs off of fastballs, which makes sense as the spin on the two pitches mirrors one another. But this season he’s primarily using his changeup off his heater, keeping the curveball in his back pocket for when he needs it as a strike-earning weapon, like when he’s trying to get back into a count or surprise a hitter first-pitch. His changeup usage has increased to 25.5 per cent entering Monday, the highest rate of his career.

“It was pretty effective last year, too. He just trusts it and he locates it well. He’s not scared to throw it to any hitter in any count,” Buschmann says. “And there’s some deception there between how he throws his heater and how he throws his changeup. There’s good speed change, he sells it well, and he locates it really well. It looks like another heater but then it isn’t. So, for both lefties and righties, it just gives him that weapon arm-side.”

As he continues seeking ways to expand the offerings he can throw in different spots — to deepen the kitchen sink — Stripling’s been purposefully working on using his changeup more often to right-handers. The process began last season and Stripling felt like he unlocked something during an early-August start against Cleveland, when he struck out six over a half-dozen scoreless innings, using his changeup nearly a quarter of the time.

The pitch doesn’t move an exceptional amount when compared to other big-league changeups, but it doesn’t have to. It just has to move differently than his other pitches, particularly his slider, which cuts away from right-handed hitters. So, from the catcher’s perspective, you’ve now got a four-seamer that stays up, a curveball that breaks down, a changeup fading left, a slider shooting right, and a just-because sinker that goes a little down and a little left.

They’re all different speeds, which complicates timing; they’re thrown to different quadrants of the zone, which complicates vision; they’re all used in different counts, which complicates prediction. That’s how Stripling gets away with his less-than-premium stuff and the inevitable mistakes he’ll make with it. He can miss his location, he can leave one over the plate like that slider to Perez, and still have a decent chance of avoiding a barrel because hitters have so many different things to consider.

“When you’re as smart as he is,” Buschmann says, “having a bunch of weapons and understanding how to attack hitters with them in different ways is a pretty valuable thing.”

There’s always room in the game for crafting and resourcefulness. And there’s always room on big-league rosters for guys who can oscillate between starting and relief with ease. Who can take five turns in the rotation, throw bulk outings from the bullpen, parachute in for an emergency save with zero margin for error, and then return to the rotation again.

That’s Stripling’s gift. And for all the times that flexibility has led to him giving up a rotation spot to a less versatile pitcher with poorer results, it can be his curse. But as long as he’s willing to continue adapting, finding new ways to get hitters out, and buying in to his unique role as wholeheartedly as he has, Stripling ought to be doing this for a very long time. And not a lot of guys can say they did that.