Luxury crossovers may seem like a relatively new phenomenon, but they’ve been around for decades and one of the first was the Lexus RX.

Launched in 1998, the original model was a huge success and that trend has continued over four generations as Lexus has sold over 100,000 RXs annually in the United States for eight consecutive years.

The company is looking to build on that momentum with the redesigned 2023 RX, which features an evolutionary design, advanced technology, and a new plug-in hybrid powertrain.

An Evolutionary, But More Cohesive Design

While designers didn’t want to mess with success, the 2023 RX adopts an edgier appearance and an updated version of the company’s controversial spindle grille. The latter immediately stands out as it features a more upright design as well as softer edges and diamond-like inserts. The grille is flanked by new headlights, which feature swoosh-style daytime running lights. They reside above minimalist air curtains that have a black surround as well as integrated fog light housings.

Moving further back, we can see an evolutionary design that incorporates streamlined styling and rounded wheel arches. Designers also cleaned up the shoulder line, while adding a more pronounced flourish on the lower doors. The model rides on 19-inch wheels with a dark gray machined finish, but customers will be able to upgrade to 21-inchers in an assortment of designs.

Some of the biggest changes occur out back as the RX adopts an angular and more cohesive design. However, the thing that instantly jumps out is the taillights, which are now connected by a thin illuminated strip. Further below, there’s a ventilated rear bumper with a sportier design that features an angled lower accent and a two-tone appearance.

A Classier And High Tech Interior

Luxury vehicles are all about the interior and current owners will be delighted once they take a look inside the redesigned RX. The model follows in the footsteps of the 2022 NX and features a digital instrument cluster as well as an all-new Lexus Interface system, which is miles ahead of its predecessor.

The company didn’t say much about the infotainment system, but it offers cloud-based navigation, an intelligent assistant, and over-the-air updates. While a 14-inch display will be optional, we can expect base models to come equipped with a smaller 9.8-inch screen like on the NX.

Thanks to the new touch and voice-focused infotainment system, designers were free to streamline the center stack and remove the mediocre switchgear found on the outgoing model. The analog clock has also been banned as the new RX lives in a digital world. 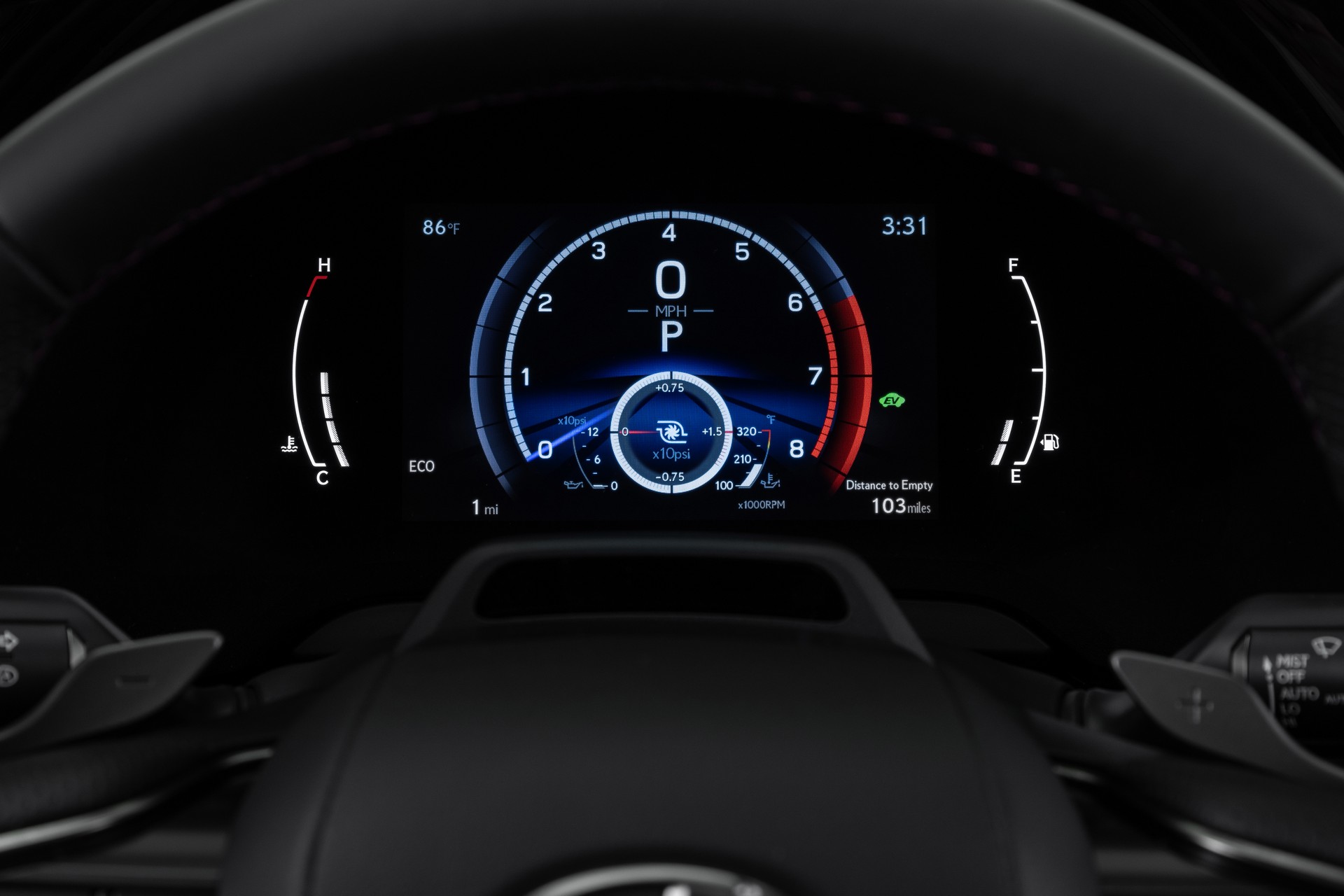 Full details will be announced closer to launch, but the 2023 RX will be offered in six different trims known as Standard, Premium, Premium+, Luxury, F Sport Handling, and F Sport Performance. We’ll talk about the latter in a moment, but Lexus also noted the model will be offered with a panoramic glass roof and a head-up display.

A New Platform And A Sizable Weight Reduction 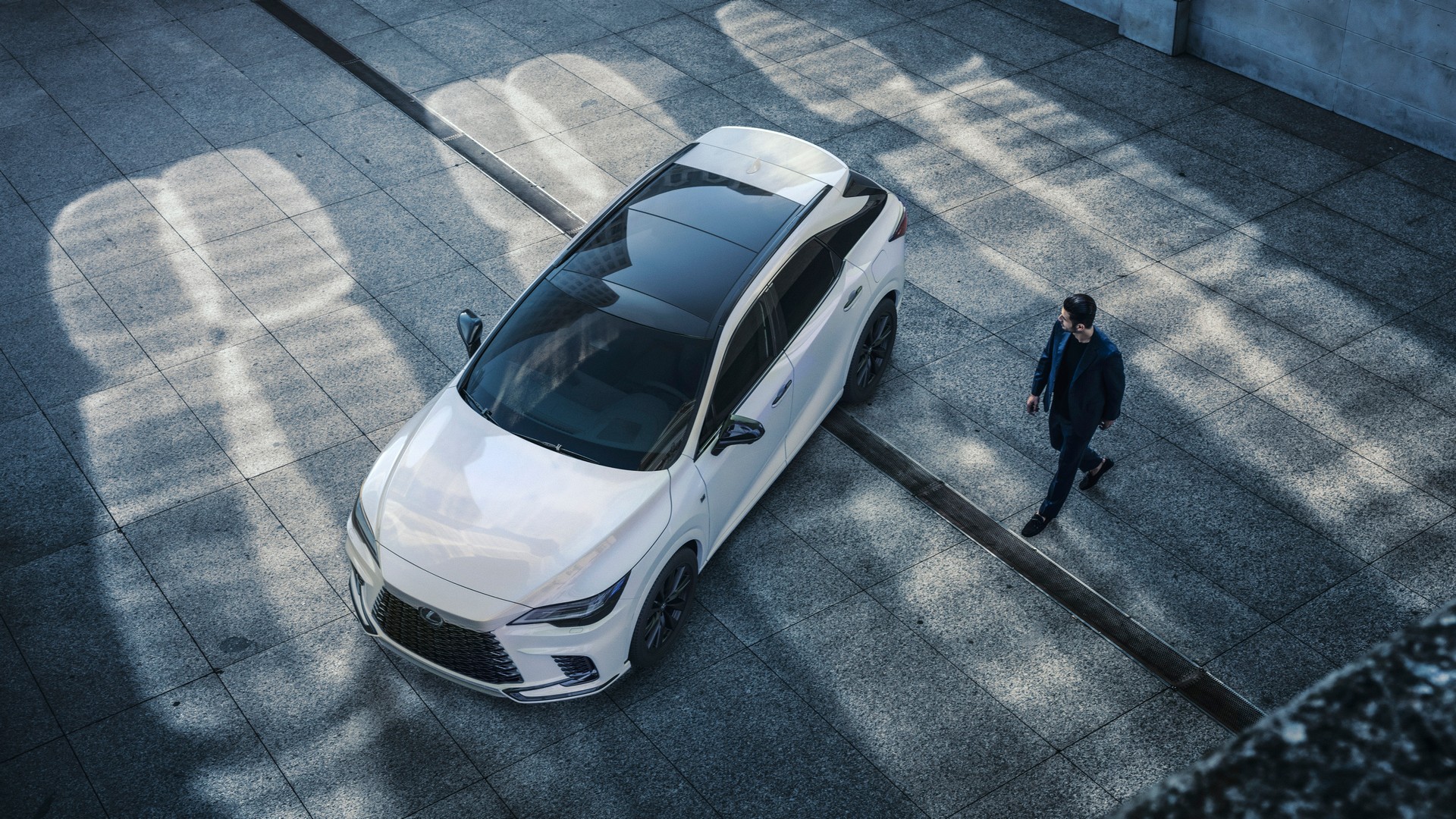 An all-new model needs a new architecture and for the 2023 Lexus RX that’s the GA-K platform, which is shared with the ES and NX. The new platform allows for increased rigidity and a weight savings of up to 198 lbs (89.8 kg). Lexus didn’t go into many specifics, but noted the crossover has an all-new multi-link rear suspension design which is “attached to a rigid high-torsion rear body frame that facilitates more consistent suspension input/travel during acceleration, deceleration and steering moments.”

Despite featuring a 2.36 inch (60 mm) longer wheelbase, the 2023 RX remains 192.5 inches (4,890 mm) long as the rear overhang has been reduced by the same amount. That’s good news as rear seat passengers will find additional legroom, while everyone can appreciate the increased cargo capacity. 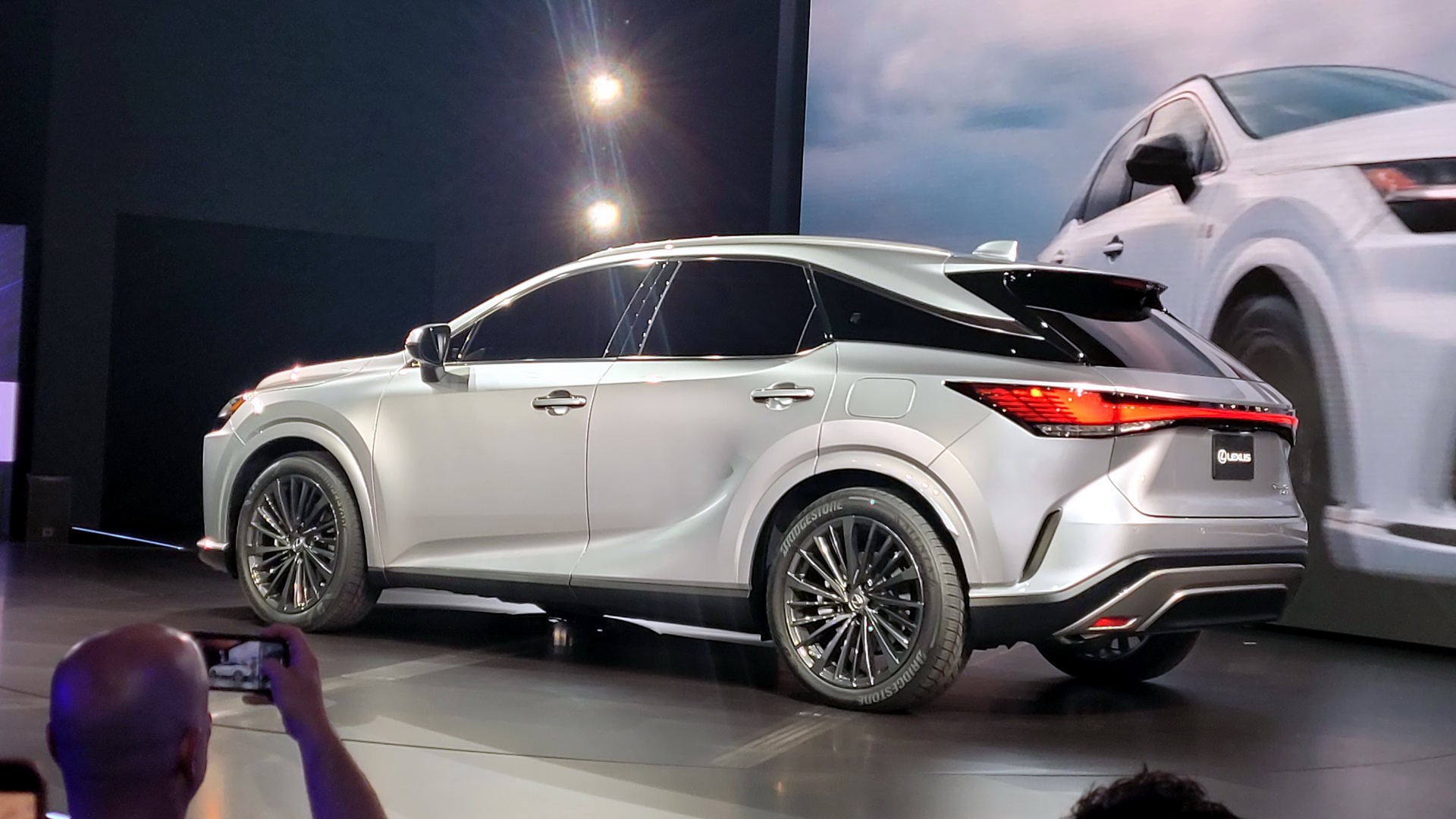 The engine is connected to an eight-speed automatic transmission, which can be paired to either front- or all-wheel drive. Lexus says the latter variant will be able to accelerate from 0-60 mph (0-96 km/h) in 7.2 seconds, 0.7 seconds faster than its predecessor.

However, it’s worth noting customers shouldn’t expect to see huge fuel economy gains. Lexus estimates the RX 350 will return 24 mpg combined, which isn’t much better than the old V6-powered model that offered up to 23 mpg combined. 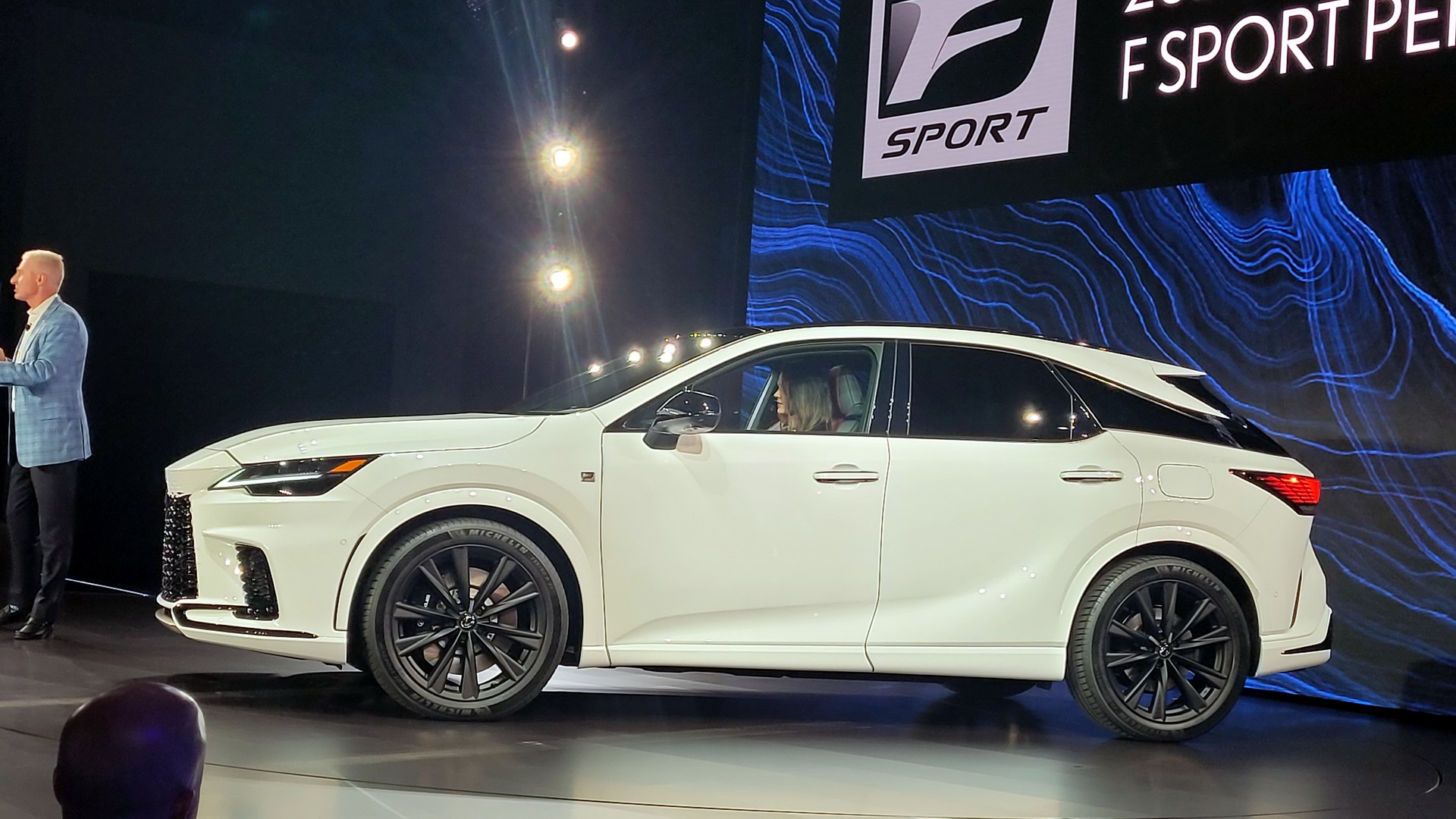 With gas prices hovering around all-time highs, many customers will probably want to opt for the 2023 RX 350h which replaces the previous 450h. It features a 2.5-liter four-cylinder engine that is paired to a fourth-generation hybrid system and a standard all-wheel drive system.

Of course, hybrids are mainly about fuel efficiency and this is where the RX 350h excels. Lexus believes the model will have a combined fuel economy rating of 33 mpg, or 3 mpg better than its predecessor.

Buyers can also opt for an all-new RX 450h+ plug-in hybrid. Lexus wasn’t ready to talk about US specifications, but the model will presumably share its powertrain with the NX 450h+. It features a 2.5-liter four-cylinder engine, three electric motors, and an 18.1 kWh lithium-ion battery pack. This setup gives the plug-in hybrid NX 302 hp (222 kW / 306 PS) and an electric-only range of 37 miles (60 km). 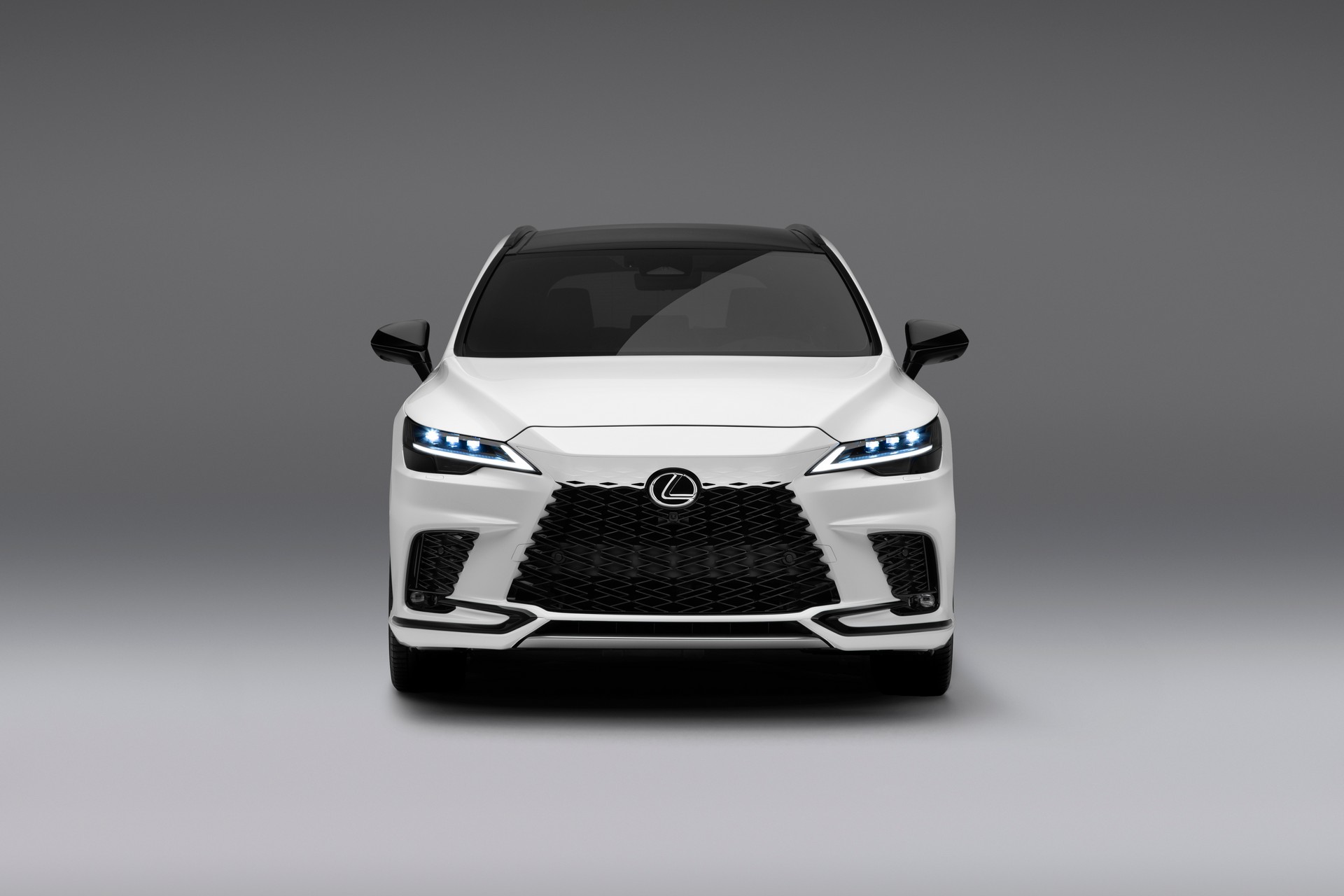 While the plug-in hybrid is notable, the variant raising the most eyebrows is the new RX 500h F Sport Performance. It’s a performance-oriented hybrid that has a turbocharged 2.4-liter four-cylinder engine, a six-speed automatic transmission, and a rear eAxle with a “high output electric motor” that promises to provide “improved performance and quick acceleration.”

On Sale Later This Year With Enhanced Safety Features 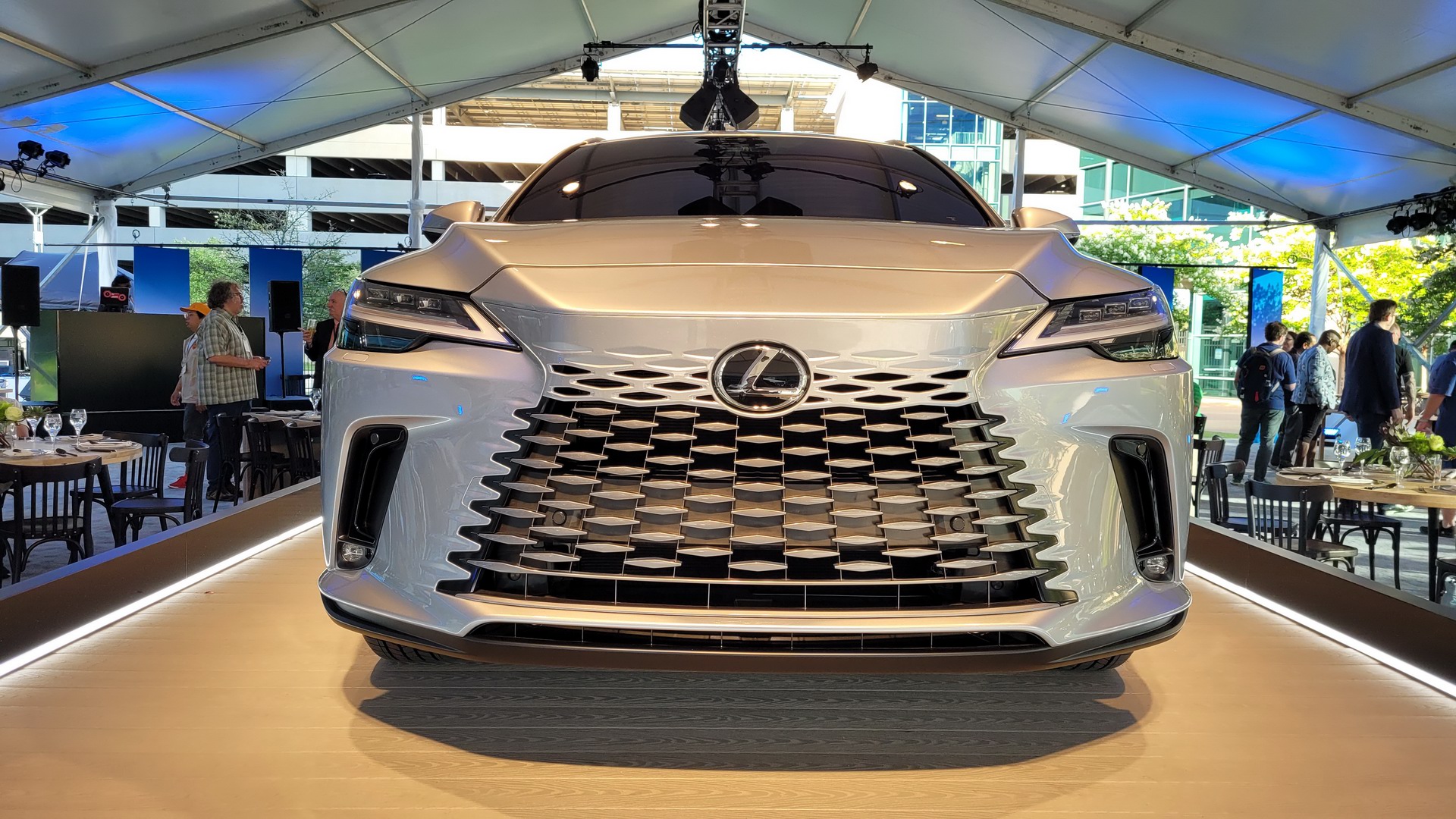 When the 2023 RX arrives at US dealerships late this year, it will come with the Lexus Safety System+ 3.0 suite of driver assistance systems. It includes All-Speed ​​Dynamic Radar Cruise Control with a new Curve Speed ​​Management function as well as an improved Pre-Collision System with Pedestrian Detection, Intersection Support and new Motorcycle Detection.