There’s a ton of focus in financial media about how high energy prices will go, or how low they will fall.

However, I think a lesser-understood aspect of this current energy and inflation problem relates to time. It’s not just the high price of energy that matters; it’s also the time that it remains at high prices that matters.

A contact of mine recently described this as “the area under the curve”, and I felt that this was a particularly insightful way to phrase it and that a short article on it was worthwhile to share.

The Integral of Energy Prices

One reason I’ve been structurally bullish on energy stocks is that oil and gas prices don’t even have to keep going up for them to be super profitable from current levels.

If oil and gas prices merely chop around sideways from here for a long time, energy producers would be in great shape financially (after a multi-year stretch of being in terrible shape). The same is true for midstream energy transporters.

For an illustration of that, this is energy producer EOG’s free cash flow and net debt charts, and it shows how troubling the prior decade was for them, and how profitable the current period is for them: 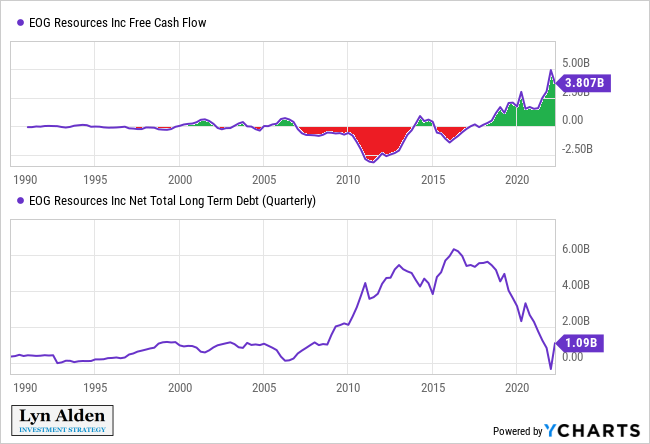 The red area represents negative free cash flow, and the green area represents positive free cash flow. During the red period of time, the company (and many companies like it) were aggressively spending on new production that was not particularly profitable, while issuing debt to do so, which investors were happy to finance. This era caused a lot of capital destruction.

After that, oil and gas producers became more disciplined with their capital expenditures, and focused on paying down debt and more prudently growing their production base. Many investors divested from oil and gas investments, and those that remained demanded more capital returns to shareholders and better balance sheets.

Going forward from this point, energy prices don’t even have to keep going up for companies like EOG to continue to generate great free cash flow, maintain a strong balance sheet, and return cash to shareholders. The industry is acting more rationally than it was before.

The past decade was quite an anomaly where investors and companies were willing to give consumers oil at structurally unprofitable levels, but that era is behind us now.

This naturally has inverse implications for the typical consumer of energy.

Suppose that crude oil, natural gas, and gasoline prices double tomorrow for a couple weeks and then quickly come back down. That would not be the end of the world. People will have a few unusually high bills at the gas pump and with their electricity/heating provider, and then get over it.

On the other hand, suppose that those prices go up by 50% and then remain there for the next several years. That would be a big drag on household budgets that compounds over time. Month after month, they would be paying out a ton of money for necessities, and probably have to start gradually cutting out some of their discretionary spending.

In other words, it’s not the current price of energy that matters; it’s the area under the curve, the integral of energy prices that takes into account both price levels and time at those price levels, that really impacts consumers.

Oil and the American Consumer

Let’s consider $60 for a barrel of WTI crude to be a comfortable price.

Oil spiking to $150 or $200 and back down is not the big concern; the big concern is whether oil will stick above $90 for a long time (and indeed possibly higher), resulting in a new normal for consumers and businesses.

In other words, the problem is how much red is likely to be on this chart going forward: 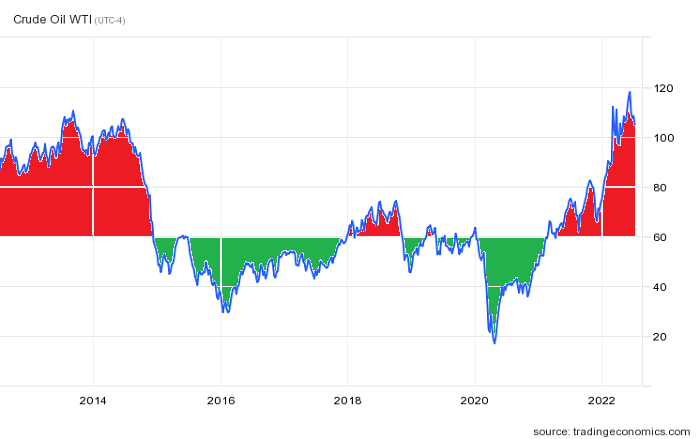 As I write this, WTI crude oil is over $100 per barrel. This is despite the US Strategic Petroleum Reserve actively selling oil into the market to try to suppress prices, and this is despite China still doing partial lockdowns and thus using an unusually low amount of jet fuel and other types of fuels on an ongoing basis. In other words, the two biggest countries are somewhat suppressing oil prices in various ways.

I was looking at a Morningstar analyst report for Chevron the other day. For their valuation assessment, they said they were using $60/barrel long-term oil prices (vs $100+ current) and $3.30 long-term natural gas prices (vs $6 current) as their assumptions.

This is mostly supported by futures pricing. For example, a December 2025 futures contract for crude oil is currently around $70 per barrel.

Many analysts are modeling for oil to return to low prices and remain there, both explicitly when analyzing energy companies, and implicitly when analyzing non-energy companies. That second part is perhaps more important; just about any analysis out of there for companies across multiple sectors implicitly assumes a return to cheap energy, and for most of them, energy is an expense rather than a revenue item.

I’ll take the “over” on long-term forward oil and gas prices. The US broad money supply increased by 40% since the start of 2020, and this has trickled out into various prices of goods and services, resulting in what will likely be permanently higher price levels for many things. On the supply side, there is credible evidence that OPEC+ doesn’t have a ton of spare capacity left, while US shale producers are being a lot more disciplined and only producing oil and gas that is profitable for them to do so (unlike the prior decade where they and their investors were happy to drill unprofitably as long as it meant top-line growth).

Oil could indeed drop to $60 in a severe recession, but I have a tough time modeling a scenario where oil persistently goes back to $60 and stays there comfortably. To me that seems like an outlier case, rather than any base case I would assume.

In other words, I’m less focused on trying to call specific spikes or drops in oil prices, and instead I’m more focused on a view that the base level that oil and gas prices fluctuate around will be higher over the next five years and indefinitely thereafter, than it has over the prior five years, and so the “area under the curve” will be quite red for the consumer and for businesses who have energy as an expense.

When we think of oil priced in dollars, we have to keep in mind that the dollar debases over time, so the measuring stick that we’re using keeps shrinking as the supply keeps growing. 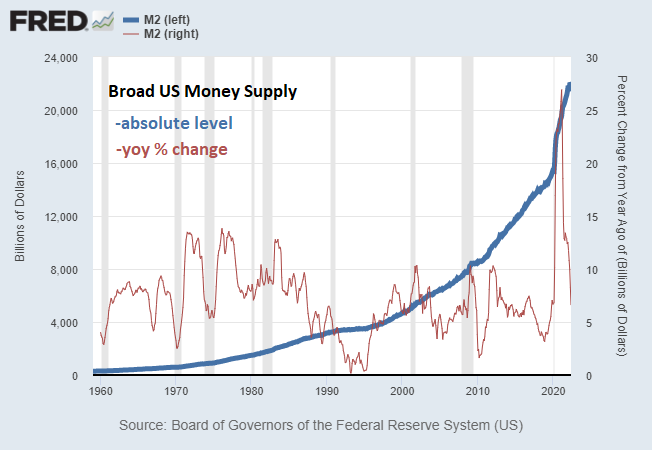 The same is of course true for other currencies as well.

Meanwhile, commodity cycles usually take years to play out. During of structural undersupply, prices go up and attract new production and transport periods capacity, and the big projects take years to fully come online. Eventually, the industry overbuilds, resulting in a structural period of oversupply, low prices, and subsequently little new investment for a long time. It takes years of grinding through that oversupplied period to start causing a period of undersupply again. Existing wells start to dwindle, emerging markets keep up ticking their energy usage, and eventually we get to the next cycle of undersupply, which I think we’re in now. It takes significant capital expenditures to alleviate that undersupplied state.

With the combination of persistent currency debasement and these cyclical commodity capex cycles, we get a big stepwise permanent change to a “new normal” of oil prices every once in a while: 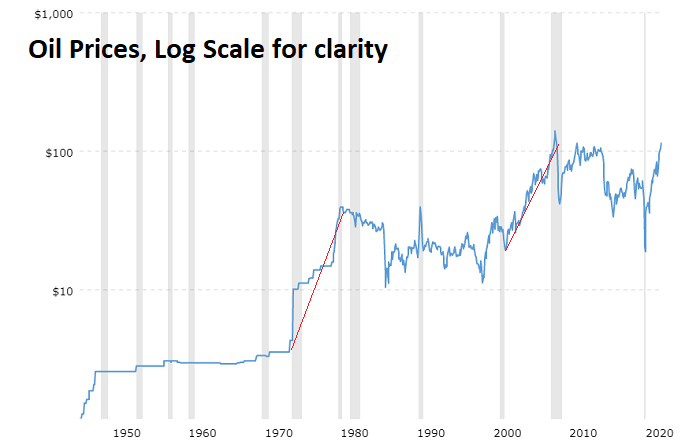 After a steady period in the postwar 1950s and 1960s, the 1970s saw a big stepwise change to permanently higher levels, as US oil production reached a structural peak and as the US went off the gold standard.

The 1980s and 1990s saw another steady period as the supply problem was alleviated at this new level, but by the 2000s, a decade of currency debasement and a new period of undersupply kicked in, resulting in another boom to permanently higher levels.

The 2010s saw another steady period, and prices even briefly dipped down to the prior range during the global lockdowns of 2020 (the biggest ever global percentage reduction in oil usage), but other than that brief time, this represented a new permanently higher range of prices.

My concern, and indeed my base case, is that we’re entering a new round of price discovery to a new persistently higher level again during the 2020s decade, much like the 1970s and 2000s decades, and that a lot of things will need to be re-adjusted to that new normal.

When we look at the the price of oil in a unit of account that doesn’t debase much over time (eg gold), we see that oil prices are pretty normal right now, right around the historic midline, and yet these price levels are causing tremendous difficulty for a lot of businesses and households: 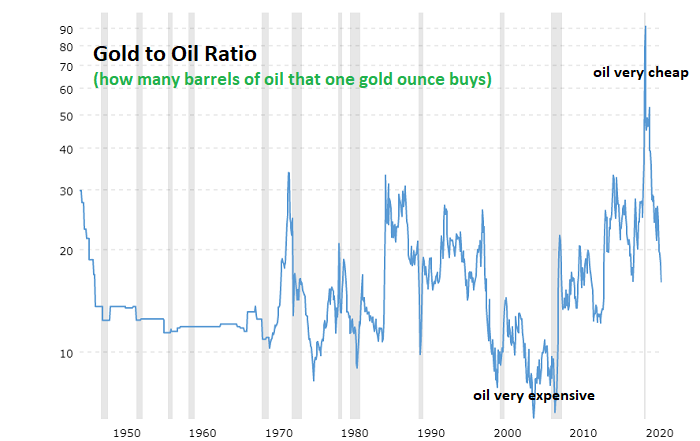 Gas and the European Consumer

The current problem is even more striking for many European countries. Natural gas prices have absolutely exploded higher, starting in late 2021.

If we consider 25 EUR/MWh to be a reasonable price level that consumers are comfortable with, then the area under the curve is now flooded with red ink: 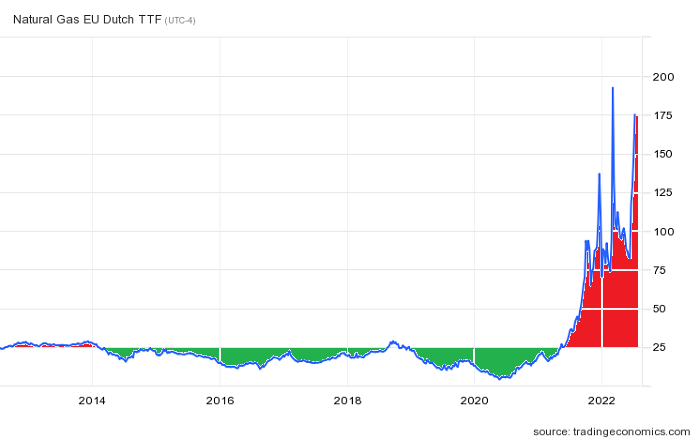 Businesses and consumers can take a few quarters of unusually high prices, but if high prices become a new normal for quite a while, then they have to make permanent shifts in how they operate.

Aside from heating, high natural gas and coal prices have a big impact on electricity prices, which affects manufacturing competitiveness and affects the shift towards electric vehicles, alongside residential budgeters getting squeezed on their utility bills.

There are many cyclical factors that can drive energy prices higher or lower in a given year, but underlying increases in the currency supply and major production/transport capex cycles dictate where the “normal” price for energy is in any given longer-term period.

The world enjoyed a multi-year period of high energy abundance, due to the sharp rise of unprofitable shale oil on top of supply/demand situation that was otherwise rather balanced, and this resulted in a significant period of oversupply. A lot of analysts view that as being the normal that we will return to, when in many ways it was anything but normal.

Instead, most of my analysis over the past couple years has pointed to that supply glut being over. OPEC likely doesn’t have a ton of spare capacity and North American shale producers have already tapped into a lot of the easy deposits, and are now operating in a more disciplined manner with an emphasis on positive free cash flow. Emerging markets continue to grind higher in terms of energy demand, as they use a small but growing fraction per capita of what the developed world uses.

Consumers and analysts likely have to adjust to persistently higher midline energy prices going forward, and this has implications for how we should value certain sectors compared to others.

The developed world managed to offset the 2000s oil price increase on official inflation levels because it was aggressively offshoring a lot of its manufacturing to China, which was a big disinflationary force on many goods and on domestic blue collar wages. I don’t think we’ll be able to repeat that decoupling again here in the 2020s: 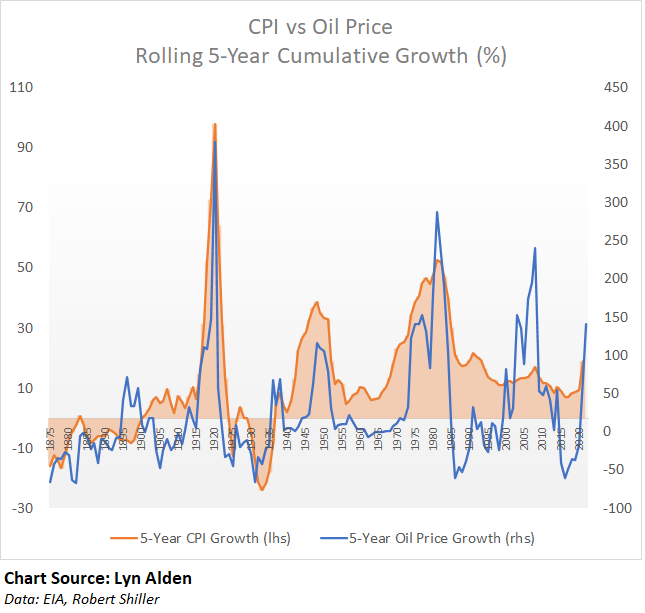