What a pivotal two weeks this will be for the Maple Leafs.

General manager Kyle Dubas heads into draft week in Montreal with some very clear needs, minimal cap space and a few key free agents who will walk on July 13.

While the Leafs’ front office has done a good job of keeping the rumor mill rather light on material, we’ve picked up on a few things they’re at least contemplating as they head into the NHL’s silly season.

Let’s start with Day 1 of the draft on Thursday.

The Leafs made just three picks at last year’s draft (second, fifth and sixth-rounders). They only have three picks here again in Montreal, albeit slightly upgraded ones (a first, third and seventh).

Dubas obviously isn’t revealing his hand on how this will play out, but other teams don’t believe that the Leafs’ first-rounder, 25th overall, is in play. In fact, there’s a growing sense that the Leafs are largely out of the business of dealing first-round picks.

This philosophy would be a departure from 2019 and 2021 when they moved their top picks as part of the Jake Muzzin and Nick Foligno trades. (They also dealt their 2020 first-rounder to get rid of Patrick Marleau’s contract but were able to recoup a selection two slots later from Pittsburgh in the Kasperi Kapanen trade.)

Could the Leafs trade back into the second round on Thursday night, if the player they want is sliding, as they’ve done in the past? Sure, that’s possible.

But don’t expect the first-rounder to go for a roster player.

It’s fair to say this front office is now less inclined to move its draft and prospect capital than they have been in the past. The precise reasoning for that is unclear, but it appears to be tied somewhat to just how many picks they have traded in the past.

This is a really hard one to handicap. Adding a goalie — and likely two — is the No. 1 priority for Toronto, but this is a tough year to have that be the case. There just aren’t many sure things available.

But if I had to make an educated bet, I would have Ville Husso high on the Leafs’ goaltender target list.

The tough thing with landing on one name here, however, is Toronto probably isn’t going to be the highest bidder for the top tenders. It appears all but certain they’ll be priced out on Jack Campbell, who is set to earn significant money for the first time in his career. But he might not be the only goalie they can’t meet the asking price on.

The Devils, in particular, have made it known they’ll be aggressive in seeking an upgrade in goal, and there is a lot of talk Campbell is a primary target there. But with other teams like Edmonton, Washington and Colorado potentially needing to add a No. 1, New Jersey could miss on its first option and have to refocus elsewhere.

That’s where someone like Husso could suddenly get a large offer despite having played just 57 regular season games in the NHL.

If the Leafs strike out there — and Darcy Kuemper stays with the Avs — what then? The trade market is looking rather emaciated, especially given Elliotte Friedman says Semyon Varlamov is probably staying on Long Island.

Maybe Dubas can pull something out of his hat here, but I don’t see marquee veterans like John Gibson and Jonathan Quick making sense.

One dark horse option who should probably be getting more talk, however, is Marc-André Fleury. He’s going to land with a contender, and there are only so many of those with a need in net.

As for trying to dump Petr Mrazek: It now sounds like he was closer to becoming a Blackhawk at the trade deadline than has been previously revealed. You have to imagine the Leafs are trying to revisit those talks — although the key is going to be what exactly they have to give up to get out of that deal.

Is that sweetener an easier price to swallow than the buyout penalty, which equates to $4.7 million in lost cap space over the next four seasons? We’ll see. 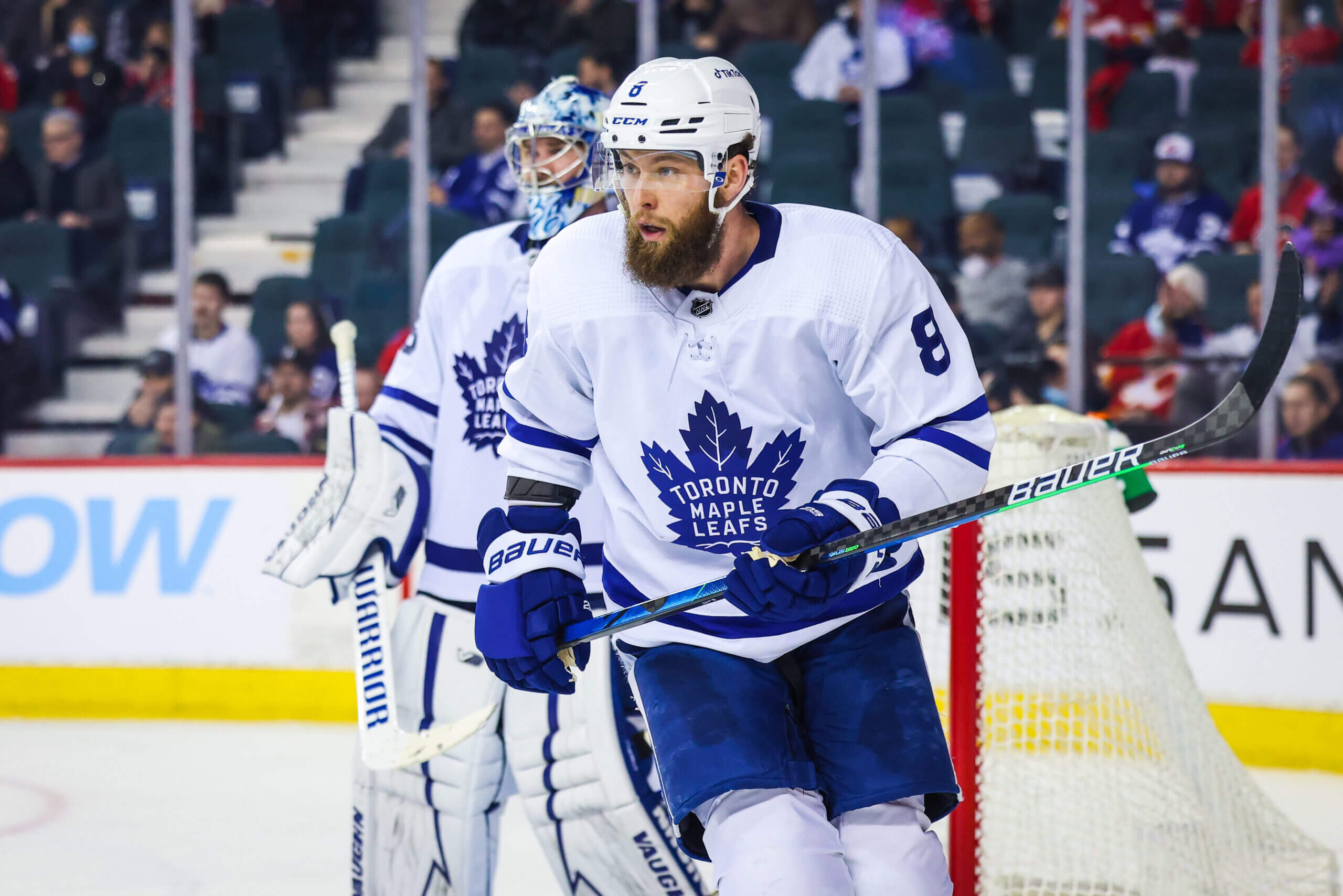 An interesting logjam on D

Over the past few weeks, multiple people close to the team have said, unequivocally, that they don’t believe Jake Muzzin is going anywhere.

In light of the Lightning shedding Ryan McDonagh’s contract to the Predators on the weekend, however, I noticed on social media this became a topic of relatively heated debate.

“If Tampa — a two-time champ and three-time finalist — can be so cutthroat with an aging defenseman to aid their cap situation,” went the discussion, “why can’t the Leafs?”

I believe the issue with moving Muzzin, from the front office’s perspective, is how do you replace what he, specifically, does? Sheldon Keefe spoke a lot when Muzzin was injured late last season about how much they missed his presence in front of the net and how often other teams were scoring “easy” goals from tough areas on the ice. That physicality, defensive awareness and experience is what they value with him.

Muzzin played well enough in the postseason that the Leafs believe there’s enough juice left in those legs for one more go, albeit in fewer minutes than the 22 per game he played in Round 1 against the Lightning.

That said, I can certainly see a world where Muzzin is moved — either in-season or next summer. His contract is heavily frontloaded, and he would have value on a budget team, given there is just $6 million in salary left to be paid over the final two years of the deal.

Muzzin’s no-trade clause also relaxes significantly on July 1, 2023, although the McDonagh situation highlights just how simple it can be for GMs to sidestep NTCs.

How that plays out is really going to depend on how Muzzin plays in the first half.

What’s interesting is that keeping Muzzin and bringing back Mark Giordano creates a logjam at left defence. That, to me, is directly related to what Friedman called “a trickier situation than the Maple Leafs hoped or wanted” when it comes to Rasmus Sandin’s next contract.

This is one that has been simmering in the background for a while, but, my read on this is, essentially, Sandin wants a shot at a prominent role. He’s wanted it for a while, too. For a variety of reasons — the pandemic being No. 1 — his 2020-21 season ended up being a mess. Even last season was frustrating with the late-season injury taking him out of the lineup, despite a very strong showing on the third pair for more than 50 games.

So, with all of these veterans in front of him, now what? Does he get moved to the right side? Does he want to be?

Will he play in the top four there, given his competition is TJ Brodie, Timothy Liljegren and Justin Holl, at the moment?

That question is possibly even more pressing given I was recently told the Leafs remained interested in bringing back Ilya Lyubushkin, yet another RD, who is set to become a UFA on July 13. (My expectation is he’ll be priced out of their range on the open market.)

There seems to be a lot more unsettled on the Leafs blue line than it appears at first glance, especially when you factor in how tight the budget is to make upgrades in goal and up front. Holl feels like the most likely option to be moved, but however it shakes out, the Leafs have to make sure Sandin feels wanted and valued.

He’s only 22 and clearly has a lot of upside. He’s also a scary offer sheet target, at least in a theoretical world where teams actually go after cap-strapped rivals like Toronto.

As much as you can understand the reasoning behind bringing back Muzzin and Giordano, at some point, you have to punch a hole if you think Sandin is going to be a good NHL defenseman in the near future.

Especially given he remains cost controlled to the point his second contract shouldn’t come in too far off what Timothy Liljegren just signed for.

Intrigue up front and the end for Mikheyev

I have a hard time seeing where the money will come from for the Leafs to make a splash up front. So, they probably won’t.

Even if they find a taker for Mrazek, move out a defenseman like Holl and make some tough calls elsewhere (Wayne Simmonds perhaps), they’re really only going to have a few million to spend on two or three forwards.

That’s assuming the cost to add a couple of goaltenders is around $7 million.

I don’t believe there has been any movement on the Ondrej Kase situation. Pierre Engvall may get a surprising raise, with the threat of arbitration involved. But there aren’t big holes in the top nine, barring a trade out of left field to move someone out.

It’s a safe bet the Leafs rely on a few Marlies to contribute more next season, with Nick Robertson and Joey Anderson two plausible candidates. That helps the budgeting somewhat, but only to the extent that the Leafs’ bargain buy forwards could be of the $1.5 million David Kampf variety instead of the $900,000 Jimmy Vesey variety.

If Dubas is going to do something bigger with his forward group, an unexpected name will have to be moved. The only ones that make any sense would be Alexander Kerfoot (a UFA in 2023) or William Nylander (2024).

Color me skeptical. This means it’ll be more painting around the edges around the Core Four.

So how do the Leafs take a step forward with that group, minus Ilya Mikheyev? Tough question.

I’ve had a number of fans ask if there’s any way Mikheyev can be retained, but the fact his UFA rights are being shopped around the league right now shouldn’t be a surprise. Mikheyev is going to go to the highest bidder in free agency, and given the cast of available scoring talent available, I suspect that means at least $4 million a season on a long-term contract.

That doesn’t fit in Toronto.

Keep in mind that Mikheyev has made a minimal salary for the past three years in North America, due to injuries and the pandemic. In fact, in 2020-21, he earned only around $800,000 because of the way his contract was structured and the high escrow deductions from the COVID-19 impacted collective bargaining agreement. That’s a lot less than he could have ordered in Russia.

He turns 28 this fall, and this could well be his only chance to really cash in, after making a bet on himself three years ago to leave the KHL and go for bigger money in the NHL.

This leaves the Leafs searching for the next Mikheyev to fill his shoes for a fraction of what he’ll sign for elsewhere.